Blue Mosque (also known as Sultan Ahmet Mosque) was built by Sultan Ahmet I between 1609 and 1616, it is the one of largest and most majestic mosques in Istanbul. 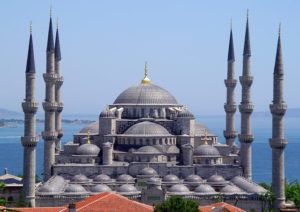 The Blue Mosque is the last building of Ottoman religious art for its architectural majesty, the other mosques, built later, were unable to overcome the grandeur and elegance of its decorations.

The site chosen for the construction of the mosque was that of the Byzantine Hippodrome, called Horse Square which has been the center of the city, another reason for this choice was the proximity to the Topkapı Palace.

The care shown in the choice of the place is also noticeable in the selection of the construction material and in the refinement of the interior decoration of the mosque.

The 21,000 majolica tiles were made in Iznik (formerly called Nicaea). When the construction of the mosque was finished, various gifts were made and among these the most precious are the handwritten corans.

The internal courtyard built on a platform has an area equal to that of the central hall and measures 72 m. x 74 m. There are 5 doors to enter the courtyard. A chain hangs from the central door and gives access to the hippodrome. According to legend, this chain prevented the sultan not to from enter on horseback and forced him to dismount and enter with respect, like all the others.

The inner courtyard has 3 entrances. To the north, below, there are the fountains that are used for ablutions, in the center a monumental fountain (şadırvan).

Over the 26 granite columns 30 domes were built. The Sultan’s Pavilion, built to the southeast of the mosque, has a private niche and represents a novelty, experienced for the first time in this mosque.

The main hall, designed with a central plan, is 51 m x 53 m, from an architectural point of view, the architect Sedefkar Mehmet Aga has not introduced any new features with respect to the Ottoman culture of mosques, but the decorations of the Blue Mosque are superior to other mosques built before it.

The reason for the name “Blue Mosque” is due to the majolicas and paintings, in which the blue-green and turquoise colors that cover the walls, pillars and domes predominate. 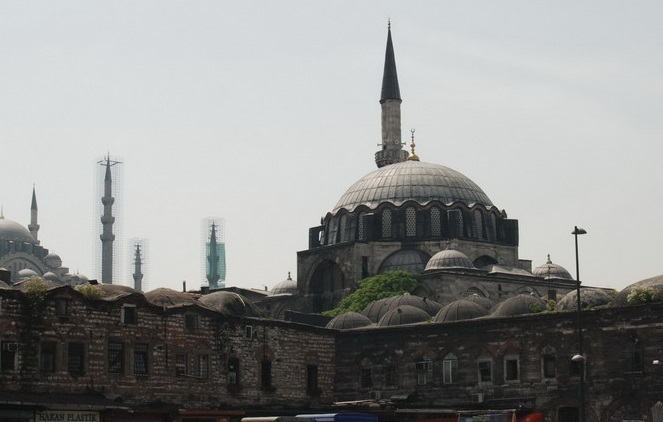 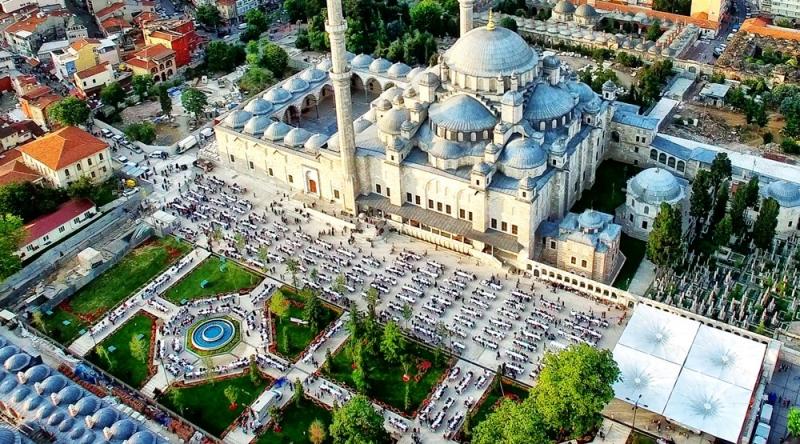 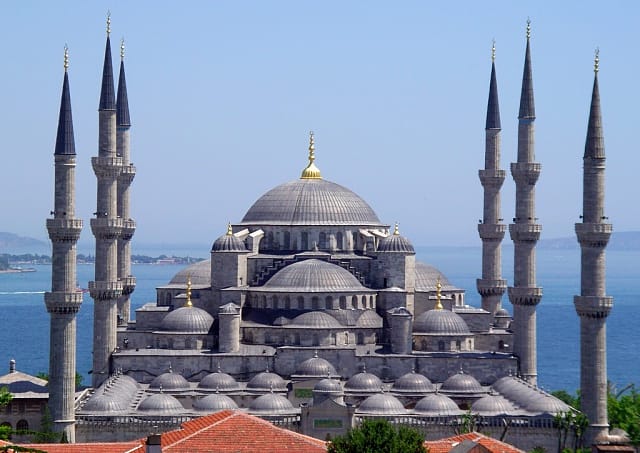 Looking at the progress of Ottoman art, there is a strong relationship with religion, since the presence of images in places of prayer is prohibited by Islam, the figurative art has not developed but the calligraphic techniques, the processing glass, stone and majolica.

For the same reason, since the prayer is done on the floor over a carpet and wooden benches are not used as in churches, the art of carpet production has advanced greatly in the Muslim world. The Turks since the 12th century practiced the processing of majolica and the processing of carpets, even in these artifacts there are differences in color and design depending on the region of origin. The predominant designs in this mosque are leaves, branches, tulips, roses, hyacinths, carnations and bunches of grapes.

There are 260 windows in the mosque. Unfortunately, the original Venetian glass has been lost over time. The dome is 43 meters high, with a diameter of 23.5 meters; the large pillars that support the central dome have a diameter of 5 meters.

The decorative inscriptions in the main dome, semi-domes and pillars are verses from the coran and phrases attributed to the prophet Muhammad (the inscriptions are the work of the calligrapher Seyid Kasım Buhari, of Diyarbakır).

Until recently, the floor of the mosque was covered with hand-made carpets, of different colors and designs (unfortunately today they have been replaced with machine-made carpets). The wooden benches are used by the faithful to store shoes. The grated galleries are reserved for women and religious meetings.

Fatih Mosque is an Ottoman mosque rebuilt in 1771 in the Fatih district, after being destroyed by an earthquake. It is one of the great mosques of Ottoman-islamic art.

The first mosque was a complex of religious buildings built in 1470 by order of Sultan Mehmet the Conqueror. This first mosque included a series of buildings including eight coranic schools, library, hammam, canteen, dormitory, market, caravanserai, hospital, fountain and cemetery.

The second mosque built in the same place, also dedicated to Sultan Mehmet the Conqueror, has a central plan with a central dome (26 meters in diameter) supported by four semi-domes. on both sides of the mosque there are two minarets. The carpets that completely cover the mosque  hall are still original and handmade. The longe where the sultan once prayed is located on the left side of the apsid (mihrab) where indicates to the faithful the direction of Mecca.

The mosque’s coranic school (seminary) is still active and has 220 students studying coran. Most of these students come from various cities in Turkey. In the large cemetery of the complex, in addition to the tombs of Sultan Mehmet the Conqueror and  his wifes, there are also the tombs of state officials. 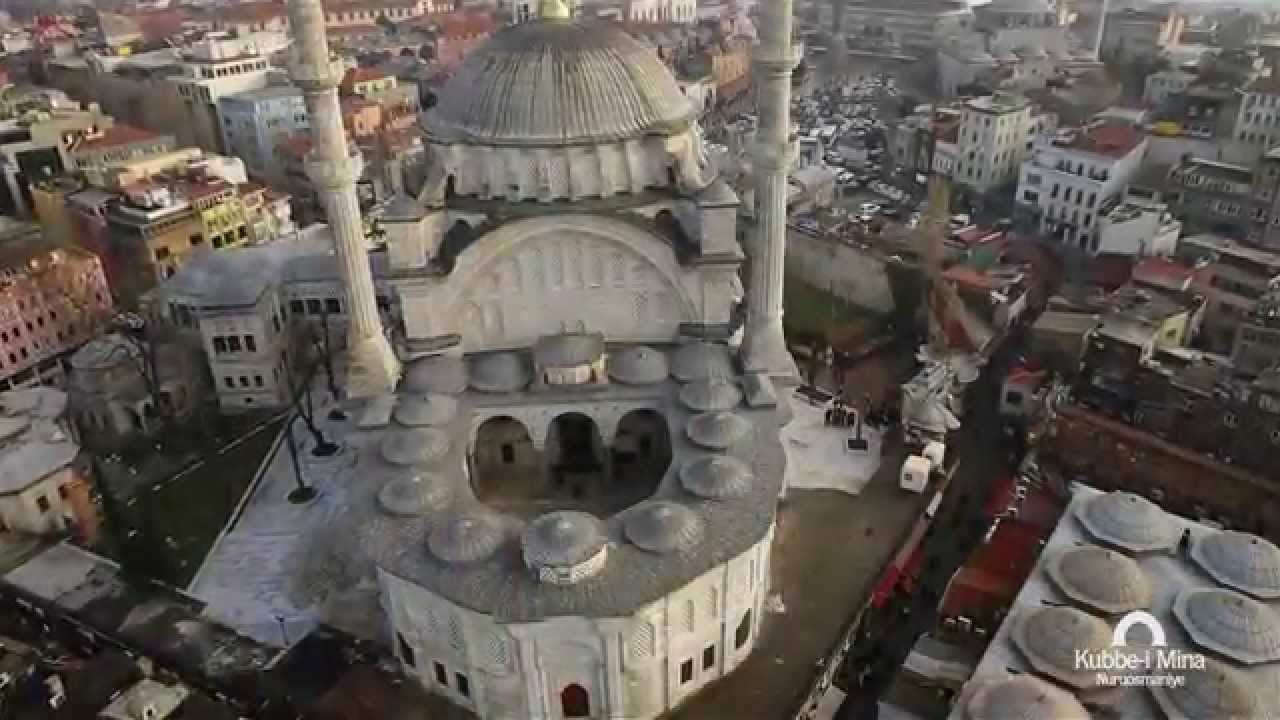 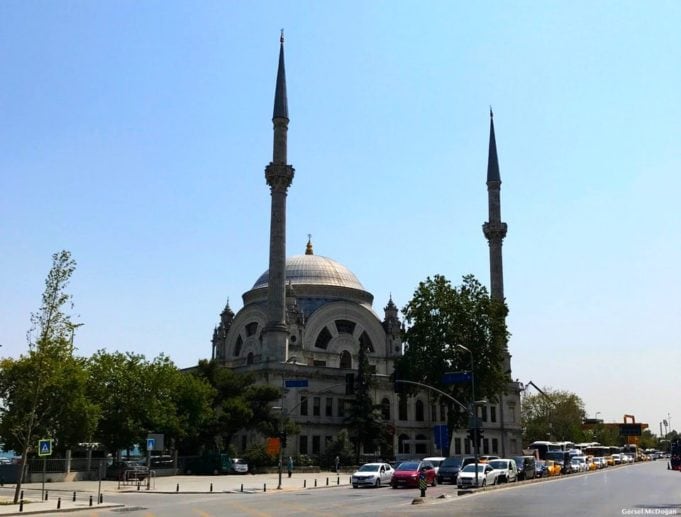 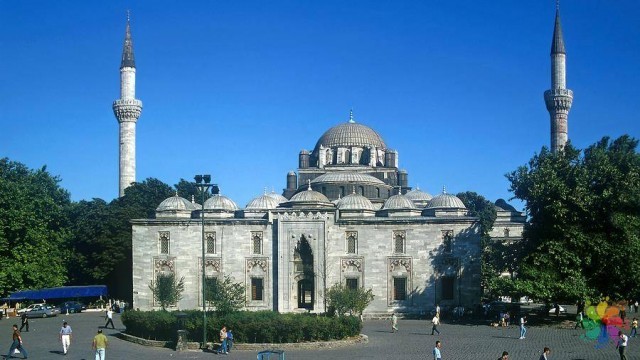 Suleymaniye Mosque was built by Sultan Suleiman between the years 1550-1557. The elegance of its architecture and the harmony of the whole complex makes it unique among all the buildings built before and after it.

The mosque has 4 minarets and 10 balconies to indicate that Sultan Suleiman the Magnificent was the fourth sultan after the conquest of Istanbul, and was the tenth sultan of the Ottoman Empire.

During the reign of Sultan Suleiman, the Ottoman Empire experienced its period of maximum splendor, moreover its territorial expansion was almost equal to that of the Justinian empire. His reign lasted 46 years, during which there were notable advances in the arts, literature and science.

The tomb of Sultan Suleiman the Magnificent, who died in 1566, is located inside a large mausoleum in the courtyard of his mosque.

Rustem Pasha Mosque was built in 1561 by order of the Grand Vizier Rustem Pascià, husband of the daughter of Sultan Suleiman the Magnificent.

This mosque, among other Ottoman mosques, is a unique example, all the interior and part of the exterior are decorated with fabulous majolica. Covering the outside of the mosque is not common and cannot be observed in other mosques, only a great vizier like Rustem Pascia could finance the expenses for priceless decorations.

Eyup Mosque was built in 1798 to commemorate Eyup El Ensari the flag bearer, martyred near the Eyup district during the siege of the Arabs between 674 and 678.

Eyup Ensari being a very important character is considered a saint in the muslim world, the mosque and his mausoleum are visited every day by thousands of faithful as a place of pilgrimage. From every part of the Turkey, every day, hopeless sick people, newlyweds, women without children, children who will be circumcised, pilgrims praying for health, children, husbands or work come to visit the tomb of the saint.

From the mosque complex that once contained a school, a caravaserai and a soup kitchen, only a part of the turkish baths and mausoleums remain.

Dolmabahce Mosque was built by the mother of Sultan Abdulmecit in 1853, on the shore of the Bosphorus and near the Dolmabahce Palace. Bezmialem, the sultan’s mother, had dedicated her personal wealth to charity and had hospitals and foundations built for poor and orphaned children in the capital of the Ottoman Empire.

Having been built inside complex of Dolmabahce Palace, it looks more like a decorated hall than a place of worship. The interior of the mosque has very sought-after decorations.

Beyazit Mosque was built by Sultan Beyazit and is an example of Ottoman architecture that has not undergone any changes after the conquest. The mosque, which resembles that of Hagia Sophia, was built between the years 1501-1506.

Nuruosmaniye Mosque, located at the entrance to the Grand Bazaar, was built between 1748-1755 by Sultan Mahmut I. It is a pleasant example of the European Baroque style of the 18th century. Erected on one of the 7 hills of Istanbul, the central hall has 3 entrances and is full of windows that make it extremely bright.