Turkey welcomed the most diverse civilizations into its territory, absorbing their respective cultures. 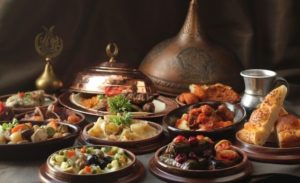 Turks who came from Central Asia who, after a long period of nomadic life, made their home in Minor Asia. And finally the Ottomans, the Empire of which, due to its extension, brought together on a single table, the cultures of Egypt, Syria, Iran, Iraq, the Balkans and the Aegean.

Naturally, this mixture of culture influenced the arts and the way of life, always bringing new ranges of colors. In fact, studying Turkish cuisine and the table culture it is good to observe all the nuances existing between the various regions and to understand them well it is necessary to keep in mind the different origins from which they come.

The discipline of the table is very important for the Turks. Lunch is a social event. That’s where the whole family gathers. The eldest member sits first and starts the meal, taking the first spoonful. Everyone sits in their place with respect and discipline. As in all kitchens, even in Turkish cuisine there are omnipresent foods that you cannot do without.

Soup has an important place in traditional Turkish cuisine. It is the first course of lunch. In Turkey in the countryside, soup is eaten even at breakfast, and especially in winter, consumed with bread is very nutritious.

There are several varieties, and the basis of one of these is the “Tarhana” which is prepared in summer. It consists of tomatoes, chopped onions, tate and herbs, mixed with yogurt and flour, dried in the sun, and then kneaded with your hands to make a grainy powder to be kept for the winter.

Another soup, much appreciated for its freshness is “Yayla”, meaning plateau, made up of rice, flour, yogurt and dried mint, reminiscent of the scent of the verdant Anatolian highlands. “Red lentil soup” and “chicken broth” are the most traditional and common. By the sea, “fish soup” are delicious and differs from region to region.

Another authentic soup is the famous “Wedding soup” made with lamb neck and flour. In the countryside, the “tomato soup” and “yogurt soup” made of yogurt and mint are consumed abundantly. 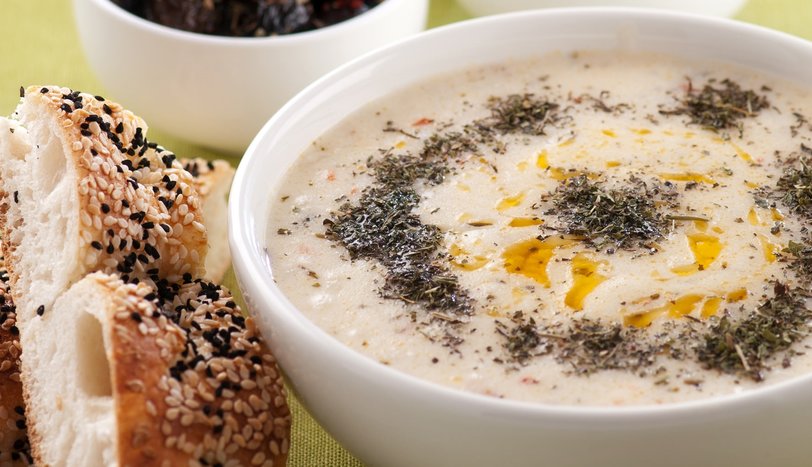 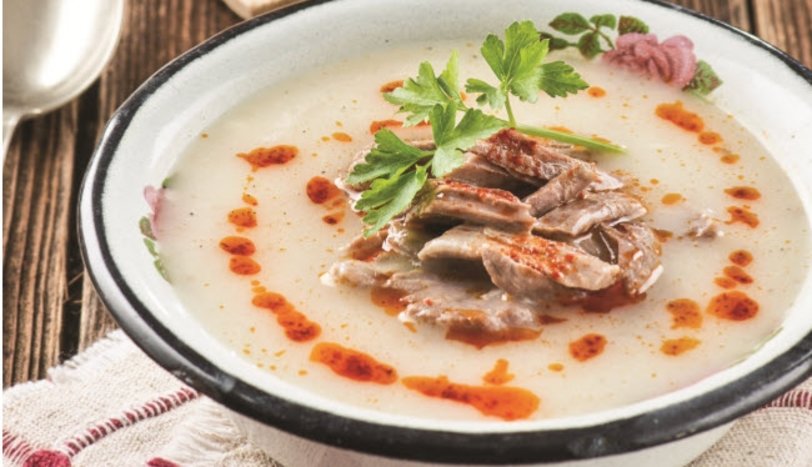 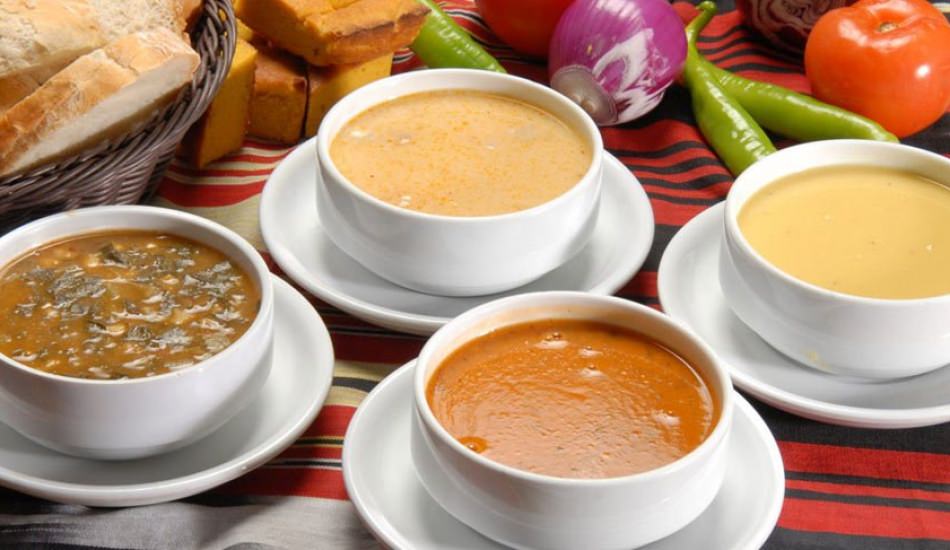 Turkey, being a country three-quarters surrounded by the sea, has an abundant quantity and diversity of fish and seafood that varies according to the temperature and salinity of the water. Unfortunately, due to abusive mistakes made by fishermen, some fish species have diminished if not completely extinct.

The best known varieties are: red mullet, palamide, sea perch, mackerel, anchovy, redfish, turbot, mullet, sea bass, snapper, trout and swordfish. Crustaceans such as lobster, crabs, and oysters being very rare, are very expensive and therefore only adorn the table of the rich, while mussels, squid, shrimp and octopus are abundant and are very often found in any restaurant.

The coastal cities, especially Istanbul and Izmir (Smyrna), know and appreciate fish a lot, while inside the country it is not even considered.

Fish, in general, is prepared for fried, steamed or grilled. In some coastal towns you can taste other varieties of preparation for example; fish soup, fish cooked in oil, stuffed, on a spit, cooked with rice or stewed.

Among the fish, the best known is the anchovy from the Black Sea. It is even represented in the folkloric dances of the region as a symbol of rapid movement and vivacity. In this region it is prepared in different ways: cooked in clay, with rice, in brine, in puff pastry, dried and in soup.

Among the seafood the most consumed is the mussel. It is eaten stuffed, fried with olive oil sauce, with legumes or rice. 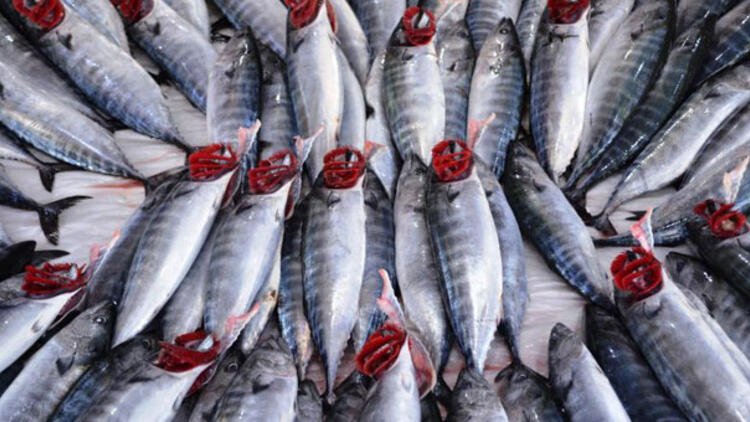 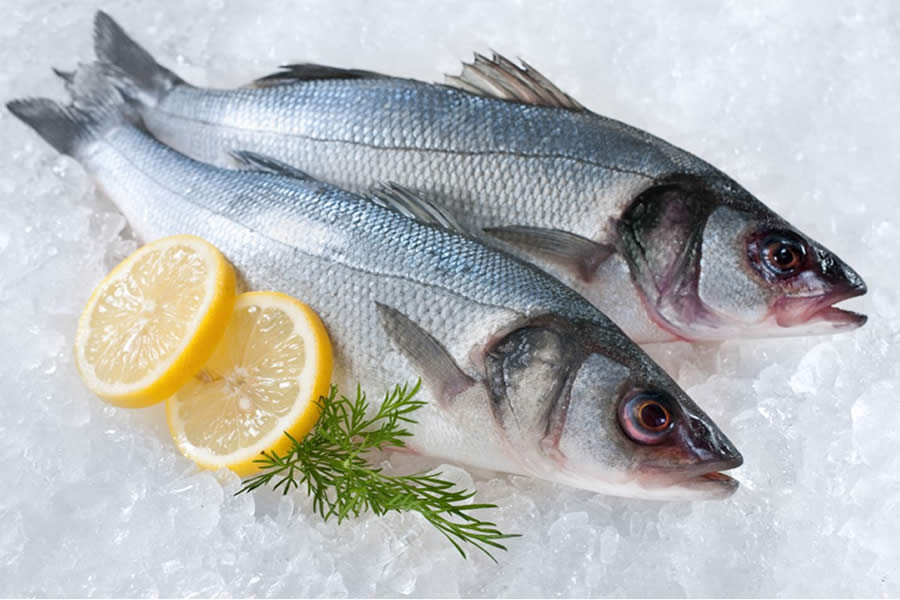 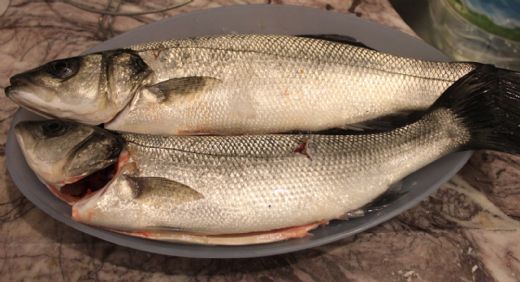 Turkey, due to the diversity of its climate, is a country rich in vegetables, fruit and vegetables which, on special days of the week, dress the regional markets with all colors; and in addition to fresh vegetables there are also dried ones. All this variety of fruits and vegetables with exotic scents, rich in colors and smells attracts passers-by. 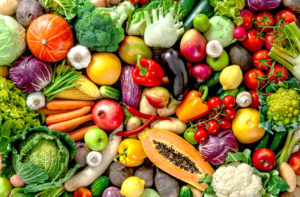 Eggplant occupies the leading place among all vegetables. 40 ways of preparation are known: pan-fried, spit-roasted, mashed, with rice, jam and especially with minced meat, baked, stuffed with olive oil, au gratin and, after being braised, as a salad. In Western cuisine, vegetables such as spinach, chard are eaten as a side dish, while in Turkish cuisine they are cooked as a dish with tomatoes and onions, on which you can put yogurt or break eggs.

Dried legumes are very popular in Turkey, as the large quantity that is harvested in summer allows them to be stored in winter. Dried beans are cooked with dried sausages and meat. These dishes are always accompanied by rice which goes well with these dishes; especially if accompanied by pickles in brine, and raw red onion they become a truly delicious dish.

After settling definitively in Anatolia, the nomadic Turks continued to apply the ancestral methods that still influence traditional Turkish cuisine today as you can see there are restaurants where you eat only meat, many butchers. 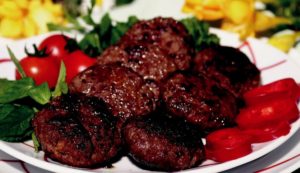 For feasts and great ceremonies, skewers are still used on the grill, while in families the housewives use mince and stew to save money.

There are many varieties of cooking: boiled, steamed, grilled, baked, with meat sauce and in terrines. Before cooking, meat is sometimes conditioned and flavored with milk, onion, vegetable and herb marinades. The best meat dishes are; on the spit, grilled, in meatballs and in the filling. Traditionally, mutton and goat meat was mostly used, but nowadays, chicken, beef and veal have taken their place.

Since pork is strictly forbidden by coranic law, pork is not used, not even wild boar, even when hunting it.

All meat dishes are flavored with many fragrant herbs and spices such as; thyme, oregano, mints, red pepper powder or flakes, bay leaf, cumin, garlic and certainly onion, which is sometimes used as a side dish.

Chicken is the only farmyard animal that enters Turkish cuisine. And turkey with chestnuts prepared for New Year’s Eve has been a must-have in Turkish cuisine for a long time. 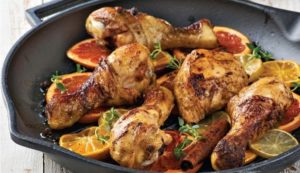 The chicken is cooked in different ways; in terrines with legumes, grilled, on the spit, with meat sauce, boiled, in broth, in puff pastry, with rice and also as a sandwich plate. The most picturesque and appreciated chicken dish is the “Circassian stile” chicken prepared with walnuts, or with that stuffed with rice, pine nuts and many aromas.

The most curious dish of Turkish cuisine is the “Chicken breast”. It is a dessert composed of vanilla pudding in which thinly sliced ​​slices of white chicken meat are thinning, blended with the mixser in the pudding, so that it is practically impossible to perceive its presence.

Thanks to its geographical position on the Mediterranean, Turkey is naturally rich in olives and consequently is rich in olive oil which gives flavor and lightness to its cuisine. 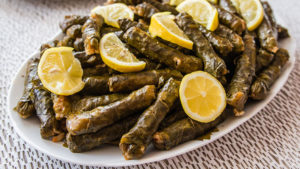 Recognized as healthy cuisine, dishes with olive oil are greatly appreciated by lovers of vegetarian cuisine, which is developing more and more all over the world. The Turks consider that legumes are a dish with all their freshness and flavor, like meat or fish. They are dishes that are eaten cold, with yogurt or lemon, sometimes with tomato sauce. They can be cooked in olive oil: green beans, courgettes, aubergines, peppers, artichokes, new broad beans, etc …

The peculiarities of this category are the fillings wrapped in vine leaves whose filling is composed of rice, pine nuts, dill, cinnamon, raisins, sugar, salt and pepper and certainly olive oil, which mix their flavor and aroma in an appetizing and aesthetic together.

Everything about flour is sacred to the Turks. For the Turks, a meal without bread is like a garden without a flower. The flour, symbol of abundance, exists in the packaging of many varieties of puff pastry and pasta.

The puff pastry is a dough composed of flour, water and salt, which, when worked with the hands, is reduced into balls and then, rolled out with a rolling pin, into very thin sheets, which will be filled with types of stuffing as; minced meat or cheese. There are also different types of dough based on vinegar, milk, eggs, yogurt, olive oil or butter, among which you can put chicken or vegetables.

The puff pastry has different shapes according to the way of preparation and cooking; with twisted papades in the shape of an arm, thin and long in the shape of a cigarette, in overlapping layers arranged in an oval shape cooked in the oven.

And one of the most famous specialties is “Su böreği”. This type of pasta made up of slightly thick sheets, blanching in water, drained and placed in a large round tray on top of each other between which you spread either white cheese or minced meat, or spinach and, passed over it melted butter, put in the oven.

In this category you can also list “Turkish ravioli” filled only ground beef tea, chopped onion, parsley and spices. They are cooked like macaroni. When they drain, they pour in yogurt, melted butter and red chili powder.

If you come to Istanbul one day, do not be surprised to see the seagulls, which catch bits of donut, pastry rings covered with sesame seeds, thrown by the passengers of the boats on the Bosphorus. 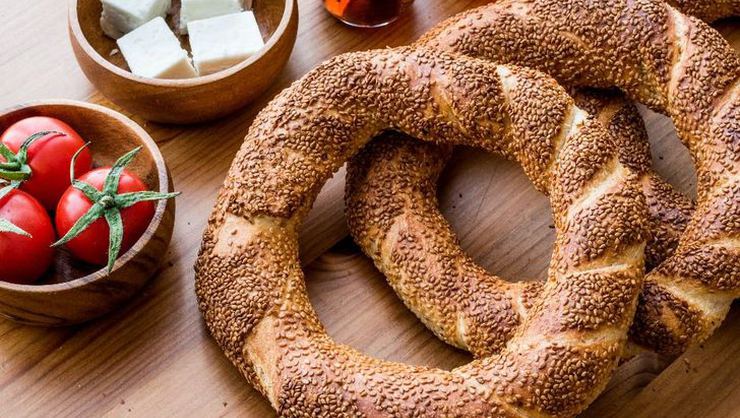 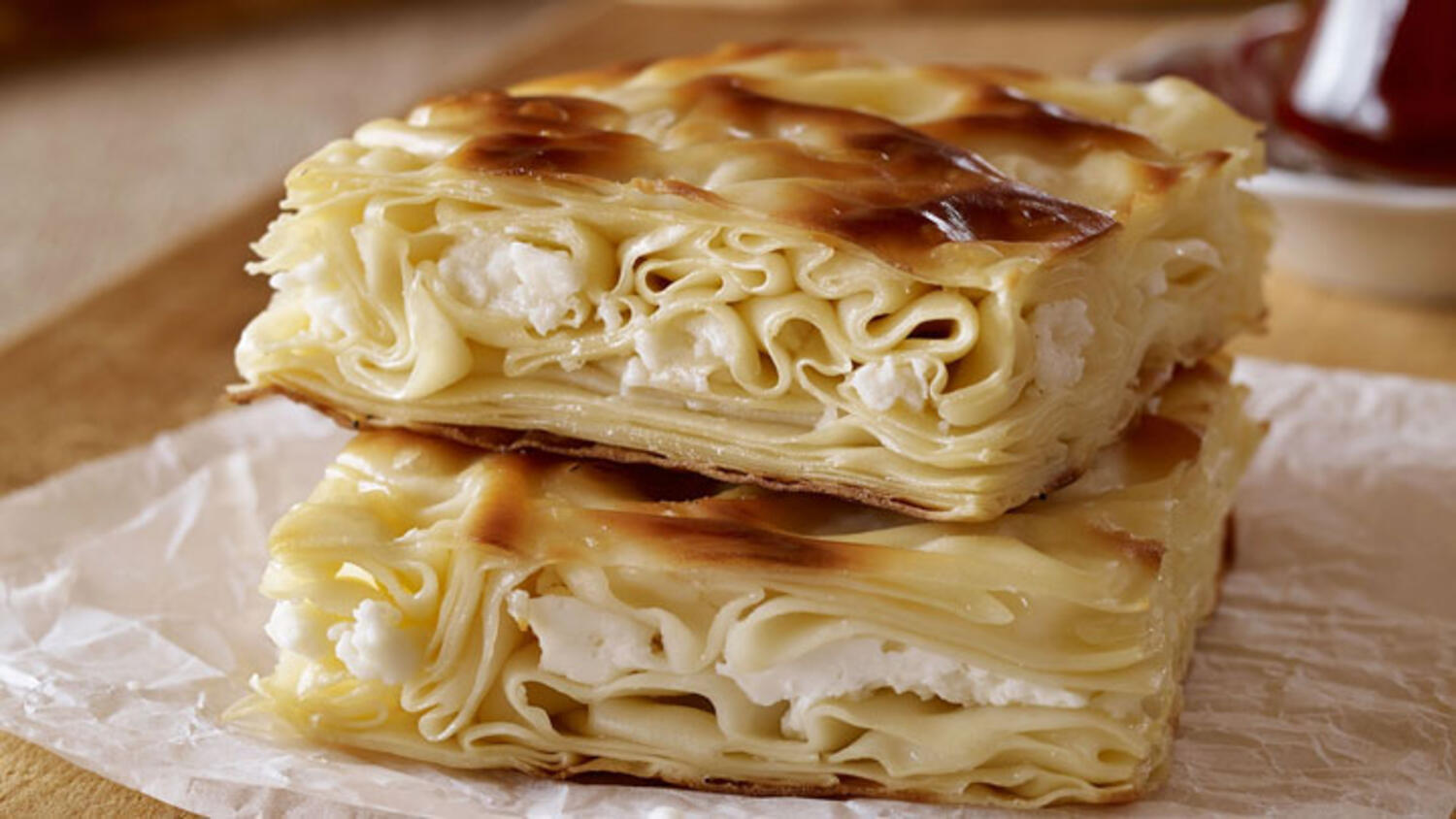 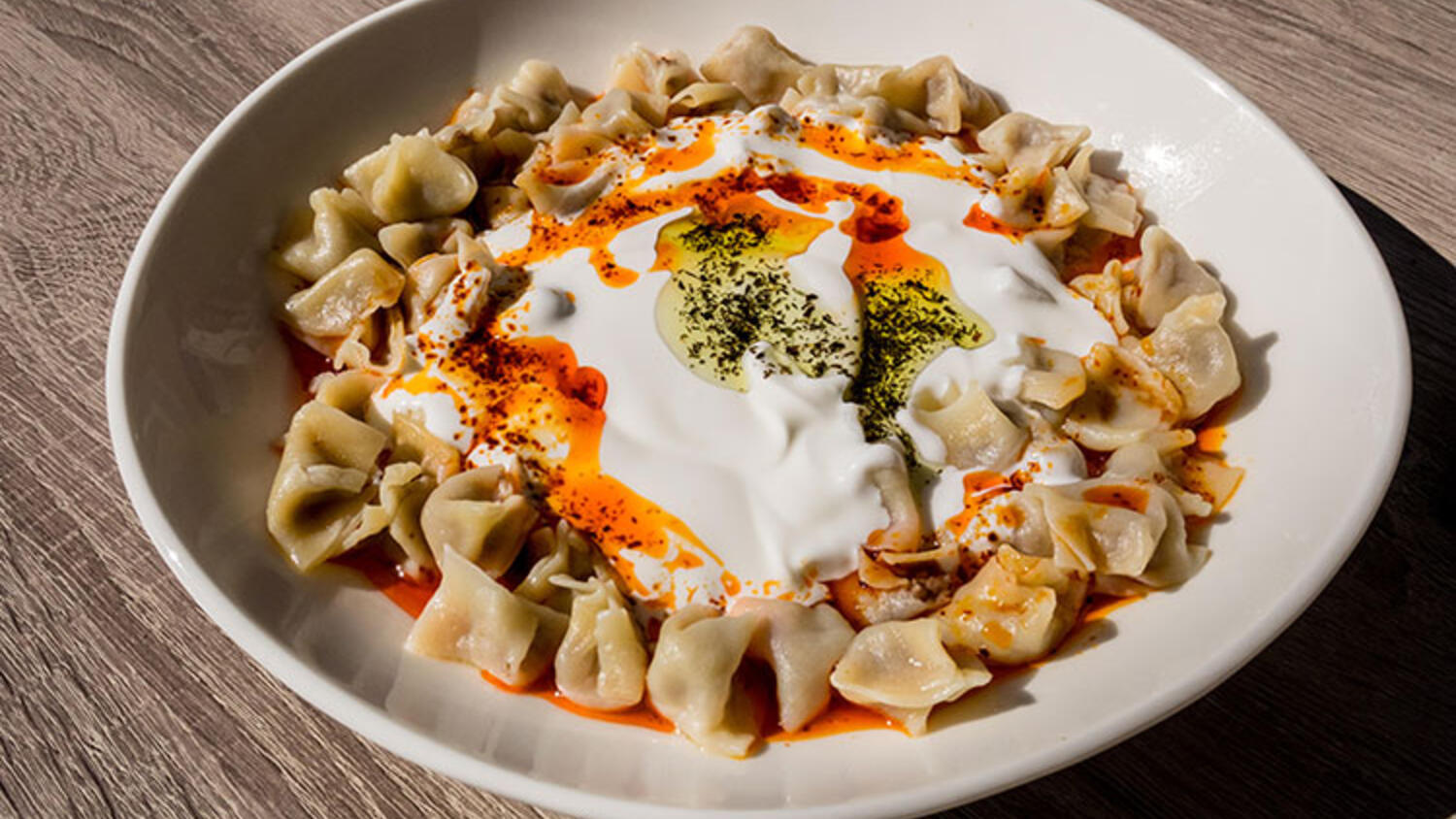 In Turkey, the “Festival of Sweets”, a religious holiday, is celebrated every year at the end of the Ramadan month for 3 days. During this festival different types of sweets are eaten. Sweets are offered to guests, to remember the moral of the Turkish proverb “we eat sweet to talk sweet”. Turks like sweets so much that in every district there are several shops where you can buy different kinds of sweets.

Among the desserts prepared for the “Festival of Sweets”, the most famous and well known is undoubtedly the “baklava”. It is the most complicated dessert to prepare. It is composed of 50 overlapping sheets of pasta, between which a thick layer of almond paste, or pistachios, or walnuts, or hazelnuts is put, depending on the region in which it is produced.

Other sweets in syrup are: “Şekerpare”, biscuit sprinkled with syrup with a pistachio or almond seed placed in the center, “Visir Parmağı” (finger of the vizier) or “Hanım Göbeği” (navel of the lady) original and delicious sweets.

In Anatolia there is a dessert that is said to have been prepared by Noah for his people survived, when he put his foot on the ground, after the flood. Its name is “Aşure”. According to legend, Noah, using all the products he had on hand, left in the ark, cooked them to give thanks to God. Aşure looks like a sweet broth prepared with dried fruits, legumes and cereals. So it is a very delicious and nutritious dessert.

Milky desserts are easy to prepare and take little time. They are the first food that babies eat after breast milk. Among these we can list: “Sütlaç” (rice pudding with milk and cooked in the oven), the “Keşkül” (ground almond pudding) and the “Tavuk Göğsü” (minced chicken breast pudding).

“Güllaç”, a very particular dessert made up of sheets of sweetened starch paste flavored with rose juice and garnished with pomegranate grains. 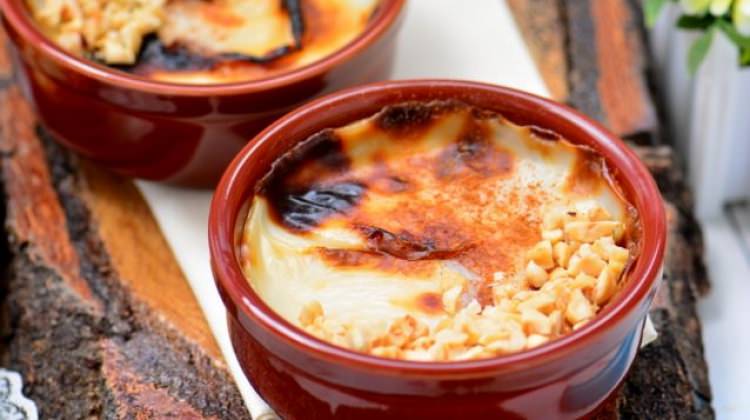 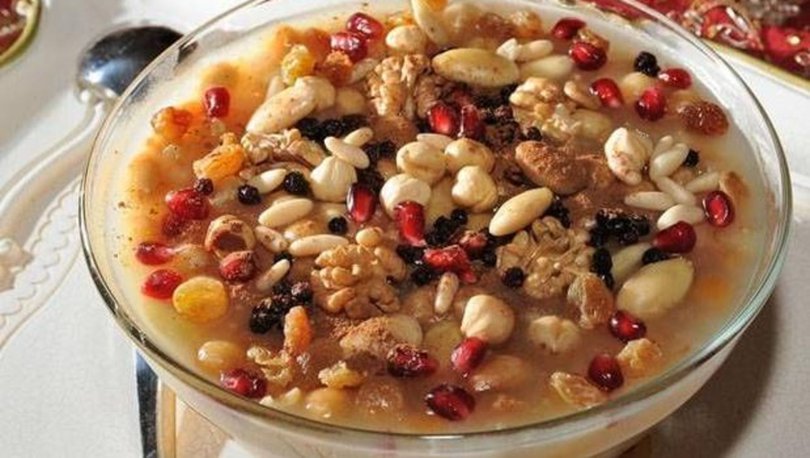 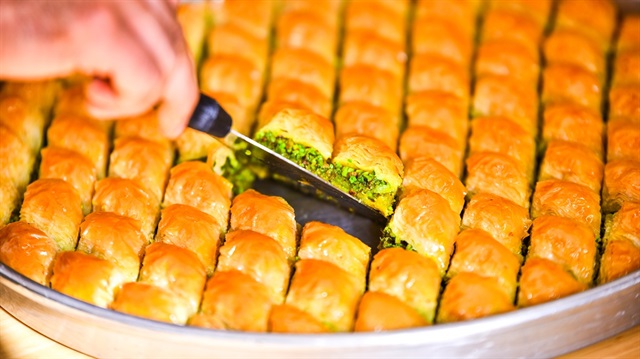